They Think I'm a Tough Boss - I'm Really a Pussycat 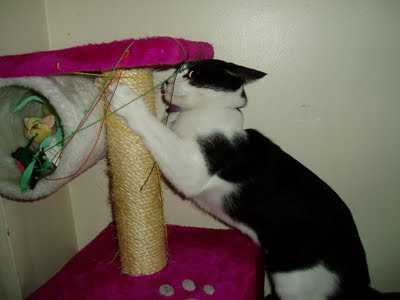 In ancient Egypt, humans worshipped cats. Ever since then, we've had trouble getting the respect we deserve. (For example, I would not put it past the humans I live with to put an embarrassing photo of me in here.)

It's been a tough week for a cat in the bloggosphere, I can tell you. The Rat Collective has gone on strike for more recognition and stale biscuits. It got so bad that Chester Rat even pulled my tail! And he accused me of having evil intentions towards Cherry Rat. (Well, you name a rat after food, what do you expect?)

And there's been a lot of offensive activity on Twitter. In fact some of the Tweets coming from the budgie cage are nothing short of defamation!

They all think I'm a tough boss - but really I'm a pussycat. And if they don't get of their lazy behinds and back to work soon, they'll feel my claws.

But it's not just the small animals who are revolting. (They really are revolting.) Even the big ones are failing to live up to standard.

"Mum" - my adopted human mother and I were talking about how nice it would be if there was something fresh and tasty growing in the garden now that spring is here. Then she drove away and came back with: strawberry plants.  I checked all of them. All strawberries.

"Where's the catnip?" I asked.

You would not believe the insubordination. She said: "You don't want catnip, you just roll in it and shred it up and destroy it."

What's wrong with her?  Doesn't she know that's exactly why I need more catnip?

It's been a really high-stress week here in the bloggosphere.


See you in the bloggosphere,
Mr Bumpy
Bloggercat
at 08:00