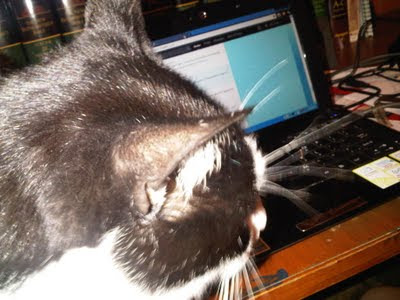 Hello out there in the bloggosphere.

I'm working on my own at the moment.

The Rat Collective is out west somewhere taking part in some sort of plague.  The Industrial Relations Commission told me I had to let them go. It's some sort of major religious or cultural event for rats - and I'm supposed to let them have four weeks off every year anyway.  Four rats - four weeks each - I could have a rat away for more than a week every month at that rate! But anyway, go they went. Not only that, but I apparently have to pay them holiday crackers, with extra cheese. I said why should I pay them for not doing any work? The commission said that's Industrial Relations for you.

It gets worse.  The RSPCA insisted on turning up at the IRC hearing.  They claimed I was the most evil employer of rats in history. They said there were labs dissecting live rats who were more humane than me! I pointed out that truly evil cats have always been the black cats - you know the stories - they're the ones who hang out with witches (the bad ones like Handsel and Gretel's witch). I'm only half black, and I don't know any witches. So I can't be that bad.

The IRC sided with the RSPCA - I'm starting to think the "R" in both of those titles stands for "Rat-loving". So I've had to pay extra compensation. And I've had to promote Rupert to Deputy Editor.


So now, while the rats are away, and the humans are doing whatever humans waste their time on when they're not serving cats, I'm in the Not-To-Be-Taken-Seriously office on my own.

So take pity on a hard-done-by cat this week. Send some jokes or emails about animals to me at contact@mrbumpycat.com

All the best to you, wherever you are in the bloggosphere,
Kindest Regards
Mr Bumpy
Bloggercat


PS - Just so you have an idea what these rats really are like - this is how they behaved on bathday. Montgomery and Chester both leapt out of the water as if it was boiling (it wasn't.)