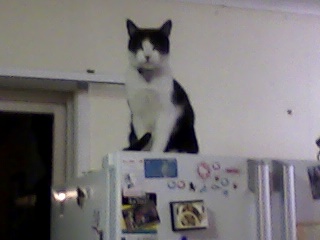 If you've forgotten, Operation Coffee Machine was my plan to take over the world, by depriving the humans of the coffee they require to function.  The plan was to leap from my on-top-of-the-fridge napping spot, on to the bench, knocking over the coffee machine.

So what happened with this great plan?  There was one thing I failed to take into account. The coffee machine is in possession of a WMD. That's right, it has a real weapon of mass destruction. This isn't an imaginary one like in Iraq - I really saw it, and felt it. So where's the United Nations? Where are the Americans? Who is going to save an innocent cat from this kind of intimidation?

I leapt onto the machine according to plan.

The next thing I knew, I was covered in a brown, smelly, liquid I can only assume was highly toxic.  Not only that, but it felt as if it was burning hot! Surely it must have been some terrible acid, or something equally evil.

The humans laughed at me. Sure they wiped down my fur and even offered to put me in the bath (no, thank you.) Mostly, they just seemed to think it was funny. Mum told me it served me right. And she said this coffee maker didn't have glass bits like the old one for a reason. (I have no idea what that reason could be.)

To add insult to injury, once she'd wiped me down, Mum said, "Well, since I've got you anyway, let's get your flea treatment out of the way."  So, yes, I was exposed to both a toxic chemical weapon, and the indignity of flea treatment all in the one day.   It's going to take weeks of napping to get over this trauma.

Never mind, while I'm napping, I'm sure I will dream up a new and better plan for world domination.

Until next time we meet in the Bloggosphere,
I remain,
Mr Bumpy,
Bloggercat.

Hey, everyone, you really should have seen it! It was so awesome, Mr Bumpy covered in coffee, humans laughing so hard they just about fell over. It was the best day! Rupert Rat (and the Rat Collective.)
at 10:16