World Domination 101 - The Art of Camouflage

As you may be aware, in the quest for world domination, we may occasionally need to do things we don't want the humans (or anyone else) to notice. One way to do this is to blend into your surroundings.  This is called camouflage.

While some other animals, such as chameleons,  are known for their camouflage skills, cats are also excellent at this. Dogs can sometimes be fairly well camouflaged as well - but not as good as cats.

Mr Woof and I are both demonstrating the art of camouflage in the photo below. You might have trouble finding us both, but that's the whole point of the exercise. 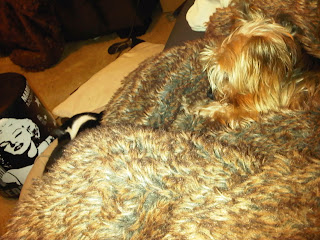 Here are some other cool cats demonstrating this. First let's see how Twitter Minion Loupi from Switzerland does it.

Loupi's spots and stripes make him almost invisible in the mulch and the shady patch in his garden.  A human could walk right past him and not notice ... until it was too late.

Like me, Mr Boo is a fine black and white cat. Notice that you can't see where the black part of the cowhide ends and the start of Mr Boo's back begins.  That's the sign of a true master of the art of camouflage.

So, there's a very important lesson in this for all cats to follow. Practice your camouflage skills. You never know when you need them.

Until next time we meet in the Bloggosphere,
I remain,
Mr Bumpy,
Bloggercat,
Supreme Feline Overlord.
at 12:26