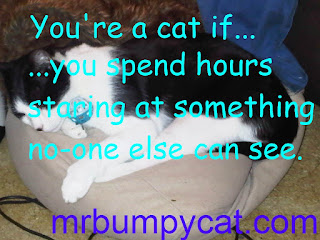 It may not surprise you to know that cats are much smarter than humans. There are lots of things that we know, that humans simply don't.

For example, last night, I came in for my dinner just before lock-up time. (It was very nice dinner, too, left-over roast chicken, made me clean my whiskers for ages afterwards, but that's beside the point.)

I was inside when Mum locked the house up.  A couple of hours later, I woke Mum by yowling at her bedroom window to let me in. Mum wanted to know how I'd got out of a locked house. The answer is simple, of course, Feline Osmosis, I went through the wall.

Mum says Feline Osmosis is "impossible".  "Impossible" is a word for anything humans can't do.  Because they don't know how to get through the wall, they think it can't be done.

Of course, I could show her how it's done, but that's an OFS (Official Feline Secret). If I told her, I'd have to scratch her tongue out so she couldn't tell anyone else.

Some humans believe they understand some of our secrets.  For example, there are scientists who claim to know how cats land on our feet when we fall from a great height.  If you dropped those scientists off a building, they would not land, unhurt, on their feet. That pretty much proves that they really don't know how it's done at all. The real secret to landing on your feet is another OFS.

Those times when we creep humans out by staring for ages at something they can't see. There's something there, but I can't tell you what. It's another OFS.

When we're out patrolling the perimeter of the house or the yard, or watching carefully from the window ledge, and you don't know what we're guarding against? Yep, another OFS. Rest assured, it's very important.

And when we knock things off the shelves, and you think we're just being destructive? Or when we watch you intently while you're sleeping? You really don't want to know what would happen if we didn't. It's for your safety.

Where we get covered in prickles that don't seem to grow in the neighbourhood, or how we come home smelling of Eau de Sewer, are also OFSs. As is what is growing in that dark corner under the bed where the vacuum cleaner doesn't reach.

I'm not allowed to tell you why I must keep digging up that same spot in the garden, killing everything you try to plant there, and spreading dirt everywhere. 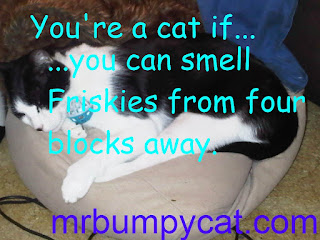 I'm not at liberty to tell you why Friskies are addictive or why catnip sends us a little tipsy, or how your car keys ended up in the bottom of my toybox, or anything about the mysterious ways of jingle balls. As for what happened to the budgie's tail feathers, my lips are sealed.

As to why I can only be affectionate towards you at the times you find least convenient - well, I have a very heavy responsibility, but that's an OFS. I would be there entertaining you when you want me, if I could.

One thing is not an OFS. I am perfectly free to tell you how the contents of the kitchen tidy ended up spread all over the floor overnight: the dog did it. He is a very bad animal and should be punished most severely.

Well, I hope you found that completely unenlightening.

Until next time we meet in the Bloggosphere,
I remain,
Mr Bumpy,
Bloggercat,
Supreme Feline Overlord.
at 14:08