Did you know that there is an athlete in the Feline Pawty?

No, I don't mean me, even though I am quite expert at jingle balls.

I'm talking about Thomas, the candidate for Blair in Qld.

When you look at his campaign poster, you see a very sophisticated dog in a bow tie. But he's not always in formal attire.

When he's not out on the campaign trail, Thomas is a Frisbee champion.  In fact, he's never met a Frisbee he didn't want to chase.  He even has glow-in-the dark Frisbees and has trained his human to throw them at night.

Given that he's such an athlete, I think I'll make him Minispurr for Sport and Recreation.  I think having someone who's an expert at sensible sports like Frisbee will make a nice change from the strange national obsession with human games.

Well, that's a big job, but Thomas is up to it.  He's a champion athlete after all. 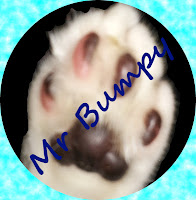 Keep up-to-date with all the Candidates at Campaign Central.
at 10:54