Announcing the Candidate for Perth 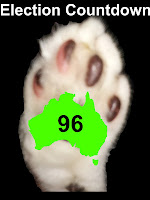 Mr Bumpy says we need more candidates so I'll have to stand for a seat.

(Isn't political language funny. You stand for a seat and then you run for it, and unless you win the election, you never get to sit in it.)

I asked him which electorate he wanted me in, and he said: "The one furthest away possible."

That's why I standing for the seat of Perth, in Western Australia.

Bumps says he might want me in the cabinet too.  That's an honour.  I always though he didn't like me,
well, with all the biting and scratching and nastiness.  But no, he says I'd be a great asset as Minispurr for the Ageing.  He wants me to inspect every old people's home, old cats' home and old dogs' home in Australia personally while I'm minister.  He says I should even stay in each of them for a while as well, to see what it's like from the residents' point-of-view.

Now, I know what you're thinking.  But Mum said straight out, "Mr Bumpy, you're not trying to get rid of the dog again are you?"

And Bumps said: "No Mum! How could you think of such a thing!  I was thinking of doing the best thing for all the oldies in the nation.  Woof's the best expert on being old that I know."

So you see, Bumps isn't trying to get rid of me, he thinks I'm an expert and my knowledge and experience are important.

Well, I have to go hit the campaign trail, and I have a nice long walkie ahead of me.

Does anyone know the way to Perth? 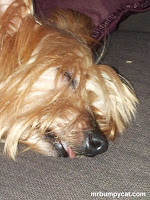