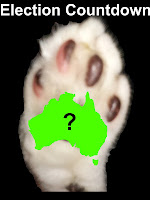 That's OK.  Recycling is good for the environment, so the Feline Pawty's happy with that.

It does make things a bit difficult for the amazing Captain Worm-Sparrow, who is running in the seat of Griffith, now against an actual Prime Minispurr instead of against a former Prime Minispurr.

So, in case you hadn't heard, I'll tell you the whole story.

It began three years ago, just before the last election when Mr Rudd had been Prime Minispurr, but the Labor party changed leaders to Ms Gillard.

At the election we had a hung parliament - that means no-one got a clear majority.  Ms Gillard managed to get support from the cross-benchers, the Independents and the Greens, so Labor got to form government, with that help.

Since then, there's always been people in the government who thought they would have won the election outright if Mr Rudd had still been their leader.  Once, Mr Rudd even challenged for the leadership, but Ms Gillard won.

Mr Rudd had another chance to challenge recently, and he refused to.  He said he didn't want to divide the party, and they had to worry about the election and beating Mr Abbott.  (He didn't mention me, I'm not sure why.)

But people in the Labor Party kept arguing over who the best leader would be, and Ms Gillard decided yesterday it would be best to have another vote on it.  She told Mr Rudd she wanted the vote for the leadership, and she wanted whoever lost to leave politics so the argument wouldn't come up again.

Well, that's when Mr Rudd rang me for advice.

I said: "Well, Kev, it's simple. The Feline Pawty would never get in this mess to start with.  No-one's likely to challenge me for leadership. They all know I'm the Supreme Feline Overlord."

So he rephrased his question. "What do you think I should do?" he asked.

"You should accept her challenge," I said.  "Otherwise, this will just go on and on and on and on. Your party's got no hope in an election if people think you're all fighting between yourselves."

And I said, "Well, let's fight this election fair and square.  Accept Jules' challenge, and then whatever happens, you'll have a party with just one leader, and no doubts."

"But we're still so close to an election," Mr Rudd said. "I don't know if we can bounce back from this in time, no matter what."

"It's OK," I said. "Remember how quickly everyone forgot how the Liberal National Party's leadership was a game of musical chairs before Mr Abbott took over.  It won't be long, and people will forget the whole thing.  And if you win, it will be because Jules challenged you, so it wasn't like you were trying to divide your party."

"Thanks Bumps," Mr Rudd said. "You're a good mate.  If you accepted human members, I think I'd switch over to the Feline Pawty."

He said, "By the way, have you heard that Mal Turnbull's planning to challenge Tony for the LNP leadership?"

"Oh," I said, "I must ask the everyone in Budgie Towers what they've heard. Well, an election competition between you, me and Mal will be much more civilised than Tony and his henchmen's character assassination of Jules. Maybe now we can actually have an election about the issues."

"Well, don't count your chickens before they hatch," Mr Rudd said. "Tony may beat him, and we'll still have his infantile behaviour to deal with. And by the way, do you think I should change the election date?"

I'm not sure if I should give him too much help.  After all, I'm trying to beat him in a federal election.  I wonder if Mr Turnbull really will challenge Mr Abbott.  That would make it a really interesting election.

Well, a week's a long time in politics, and sometimes even a day can be a long time.  But there we have it.  Mr Rudd took my advice, and last night he became Labor Party leader again, and today he was sworn back in as Prime Minispurr.

We may be friends, but you know I still intend to beat him in the election. 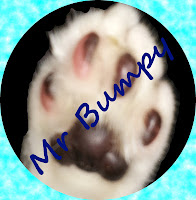