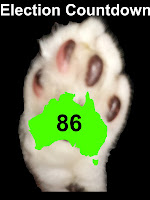 With 86 days to go to the Federal Election, the Feline Pawty looks unstoppable.

The polls (on the right-hand column of mrbumpycat.com) still predict 100% votes will go to the Feline Pawty, with 100% approval rating for Mr Bumpy as Prime Minispurr.

Mr Bumpy said, "As the election date gets closer, and the human politicians indulge in more cat-fighting than the cats and honorary cats of the Feline Pawty do, there's very little chance that anyone will even consider voting for a human over their local Feline Pawty candidate.  We're cuter, smarter, and we promise to never appear in public wearing lycra.

Meanwhile, the Feline Pawty Candidate for Goldstein (and the Shadow Minispurr for Sneakiness) Jessie, has launched her own campaign posters.

See Jessie's other poster, and read about her campaign so far at Jessie & Jane.

Mr Woof, candidate for Perth, and Shadow Minispurr for Ageing, started out to go walkies to his electorate, made it as far as the couch, and has stopped for a nap.  He expects to reach the front gate some time this evening. 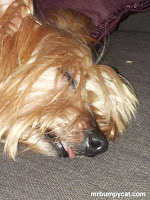