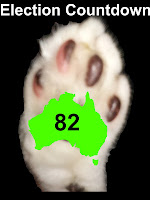 You may recall a while ago a strange cat wandered into my home. He was back last night.  Mr 19 chased him out.

I have come to believe that he is spying for either Mr Abbott or Ms Gillard, trying to gather intelligence to use against me in the election campaign.

I've got to say, I'll have the last laugh on him. There's no intelligence in my house to gather.

Anyway, if we're using spies, I have a very effective spy, who is also a black cat.  But this one's a sleek little panther who won't get caught and chased away like the strange cat who tries to get into my home.  Lovely Jessie from Jessie & Jane is going to be Minispurr for Sneakiness in the Feline Pawty Government.

I've been learning about the spy business by watching old Get Smart episodes, but Jessie already knew it all.

I'm going to call Jessie on the super-secret shoe phone.  Once I pass this on to her, I know counter-intelligence will be taken care of.

Jessie and her hoodies will know what to do.  She's already discovered that Mr Abbott does keep budgies ready for smuggling.

I'll just give her a call, and leave it all in her capable paws.  Then I can have a nap to recover from all this tension and subterfuge.

And before I go for my nap, I must have a word for both of those human political parties, about any dirty tricks campaigns they're thinking of starting:  "You mess with the cats, you get the claws." 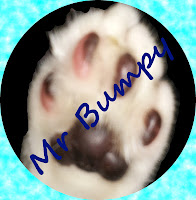