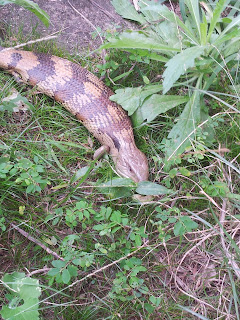 Mr Woof: (With lots of excited barking and tail wagging.)  It's a lizard! A lizard! There's a lizard in our yard! A lizard! A...  Oh wait....  Ahem.  Hello Mr Lizard.  My name's Woof. I'm a Feline Pawty candidate in next month's Federal Election.

Lizard: Go away and leave me alone.

Mr Woof:  The Feline Pawty's not just about cats, oh no, no, no, no.  It's about the interests of all animals. Don't you think its a bit ruff that the humans control everything?  Well Mr Bumpy thinks so, he's our leader - he'll be Prime Minispurr when he's elected.  He says animals are much better equipped to run the country than silly old humans.

Mr Bumpy: (Running from the other side of the garden.) What's this? O hello.  My name's Mr Bumpy. I'm from Queensland and I'm here to help.

Mr Bumpy:  And this is Mr Woof, he's from Queensland and he's here to help, too.

Mr Woof: I think Mr Rudd used that as well, when he brought Mr Beatty out of retirement. You've got to come up with something original. You don't want people thinking you're Rudd Light.

Mr Bumpy: Well, what's important is just how much difference your vote can make next month.

Lizard: (Puffing himself up to twice his size and hissing.) I said go away and leave me alone!

Mum: (Coming up behind Mr Woof and Mr Bumpy and scooping one animal up in each hand.) OK, you two.  Leave him alone. He doesn't want the pair of you harassing him.

Mr Bumpy: Mum! You can't do that. It's against the rules.

Mr Woof: (Wriggling.) Mum! I just want to talk to him!

(Mum carries both mini-politicians inside and closes the door.)

Mr Woof: How are we going to get votes if we can't even talk to the voters?

Mr Bumpy: I wonder if he's still there.  I should be able to see him from my fortress.  (Leaps gracefully up to the cat pedestal, climbs through the cat-flap to his fortress.)  Oh no, he's gone.

Mr Woof: Maybe his mum took him inside, too.