The Election Campaign So Far

Well, how is the election campaign going so far?

In the past week, we've found out that Mr Abbott thinks wisdom belongs in a suppository, and that he considers "sex appeal" to be a good thing in his female candidates, and talking about marriage equality as "a radical change based on the fashion of the moment".

Mr Abbott's main policies are to abolish the carbon tax (which Mr Rudd has already abolished), to stop the boats, and to insult Mr Rudd.

Mr Rudd's main policies are to improve the internet, to stop the boats, and to insult Mr Abbott.

Mr Abbott wants to fix the economy and increase jobs by sacking lots of people who work in government jobs.  (The same way Mr Newman has done in Queensland.) That makes sense if you keep your wisdom in a suppository.

Mr Rudd says the economy doesn't need to be fixed because it made it through the Global Financial Crisis without losing its AAA credit rating, and our per capita debt is incredibly low.

I'm not especially worried about the economy, because The Conversation's election fact check has found that yes, Mr Rudd is right, and the economy's fine.

On the other paw, I think both of the major parties are wrong about asylum seekers. I think, if we want to stop people from risking their lives on unseaworthy boats, we shouldn't punish them when they get here - we should help them before they leave Indonesia, and give them a safe alternative. Really, would you like to travel from Indonesia to Australia in a leaky boat?  Your paws would get wet!

So, well, what can I say about all of that?  I think the big thing for you voters to remember is that if you check Politifacts or The Conversation's Election Fact Checks, you will never find any instance where they have found me lying or telling half-truths.  How many other potential Prime Minispurrs can say that?

If you vote for me, I'll probably walk all over you the same as any other Prime Minispurr would. But I'll be much cuter than them while I do it. And I'll always be scrupulously honest.  And I'll keep asylum seekers safe from wet paws. 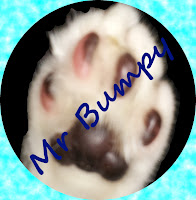