I've been reenacting scenes from the life of my famous ancestor Saint Bumpy.

Saint B was known for washing his face and paws before meeting the young Jesus.

Of course, later the same day, he got in a bad mood and caused an earthquake in Bethlehem, scattering wise men everywhere. How's that for an epiphany?

OK, Saint B was a bit capricious. Some church scholars in fact suggest he wasn't a saint at all, but a complete jerk. They back this up with the story, probably apocryphal, of his making angels fall. (His making angels fall might be an apocryphal story, but it is a lot of fun to recreate. I've done that, and the earthquake, several times.)

I think the church scholars who criticize Saint B are probably just jealous that they don't have such an awesome ancestor. In my book, he's a true saint and a model for all cats to follow.

Whatever you're doing this Christmas, remember to keep your face and paws clean. As for the rest of your body, roll in the dirt, whatever. It doesn't matter. Even saints can't be completely clean. 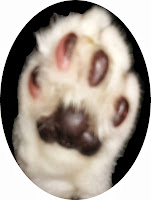