Mr Bumpy launches his own YouTube Channel, with a demonstration of how to ignore a human, while ensuring the human can't ignore you.

Fanta: What are you doing, Bumpy?

Fanta: Are you a detective, Bumpy?

Bumpy:  Why yes, I am.  This isn't the first crime I've investigated.

Fanta: Can I help?

Bumpy: Yes. You can be my dumb sidekick.

Bumpy: Every great detective has one.  Holmes has Watson.  Pirot has Hastings.

Fanta: What does a dumb sidekick do?

Bumpy: Has everything explained to him so the people watching the tv show know how clever the detective is.

Fanta: Oh.  So what are we investigating?

Bumpy:  Mum was seriously assaulted last night, while she was asleep.

Bumpy:  Didn't you hear her squeal?

Fanta: Yes, but I thought she was having a bad dream.  I sometimes have bad dreams, you know.

Bumpy:  No.  She woke up to find she was soaking wet, and so was the bed.

Fanta: No! How did that happen?

Bumpy:  It was the work of a criminal mastermind I call Megadrool Dog.  I've been trying to catch Megadrool Dog for months now.

Fanta: You mean this isn't the first time it's happened?

Bumpy: Far from it.

Bumpy:  Well, you're only young, and you're a dog, and you're a dumb sidekick.  You don't know much.  But Megadrool Dog (whoever that really is) has been sneaking in here and drooling all over Mum while she sleeps.

Fanta: Oh, that's awful.  Poor Mum. How is Megadrool Dog getting in?

Bumpy:  Through our door.  I know that because, this never happened before you came here and there was only a tiny door for me.  But now there's a door big enough for a dog your size, well, Megadrool Dog is getting in that way.

Fanta:  But Mum and Mr D lock our door during the night!

Bumpy:  Did I mention that Megadrool Dog is a criminal mastermind. He, or even she, has a way of breaking in through our door.

Fanta:  And how does Megadrool Dog get into our back yard to come through our door?  The fence is so high.  You can get over it because you're a cat, but a dog can't jump that high.

Bumpy:  We are dealing with a very clever criminal mastermind here.  Megadrool Dog seems to be able to get our locked gate open the same way as he or she gets our locked door open.  Either that, or,  (whispers) he or she has a collaborator on the inside.

Fanta: An inside job!

Fanta: Surely not!  I couldn't believe that.

Bumpy: I don't want to believe it of our humans either.  And I know it couldn't be Mr D because he's the best human in the world.

Fanta: How do you know Megadrool Dog is a dog anyway?

Bumpy: Elementary, my dear Fantasia.  The amount of drool was way too much for anyone my size.  It had to be someone at least as big as you to produce that amount of saliva.  Hence, Megadrool Dog is definitely a dog.

Fanta: So how do we catch this evil criminal mastermind?

Bumpy:  Well he or she got away this time, but I have a plan.

Fanta: Is it a very clever plan?

Bumpy:  It's better than clever.  It's a cunning plan.

Fanta: What is this cunning plan?

Bumpy: From now on we, by which I mean, you, will sleep right on top of Mum of a night time.  That way when Megadrool Dog comes in to drool over her, you will get drooled on instead.  You will wake up immediately and subdue the villain, and call me in time for me to get credit.  I would do it myself, but you know, dog drool would ruin my hairstyle.

Fanta:  OK.  I'll sleep on Mum and keep her completely safe from Megadrool Dog.  Great plan, Bumpy.  You really are a fantastic detective.

Email ThisBlogThis!Share to TwitterShare to FacebookShare to Pinterest
Labels: a moment in the mrbumpycat household

Mr Bumpy's List of Potential Uses for a Dog

Email ThisBlogThis!Share to TwitterShare to FacebookShare to Pinterest
Labels: other stuff 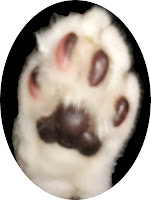