You may have heard we've been having some issues with competition over litter trays here lately.

The vet told Mum the way to avoid litter tray aversion (ie weeing in places other than the litter tray) was to have one more litter tray than the number of cats.

Mum thought about this and decided there was absolutely no room in the bathroom for a third litter tray.

She kept saying that as she washed Fanta's bed.

She kept saying that as she threw things out, and soaked and disinfected other things.

Then I weed in her handbag.

She bought a third litter tray.

If the vet was right, that would have been the end of the issue.

Well, hello, have you met me? I'm Mr Bumpy, the Supreme Feline Overlord.  I'm not going to allow a human to be right.

This latest litter tray doesn't have a cover - Mum was right there was no room for another big tray.  A tray without a cover means I can spread litter all over the bathroom.  So not only do the humans have to make their way around three litter trays, but they also have to avoid standing in the increasing spread of cat litter.  There's always a certain proportion that makes its way out of the bathroom and on to the hall carpet, no matter how many times a day Mum sweeps it up.

Sometimes I get in the tray even when I don't have to use it, just to kick litter everywhere.  It's fun, and I haven't been able to do that with the other type of tray.

This morning, when Mum changed the litter, I rushed in to be first and weed a little in each tray.  That's right, all three of them.  Now when Percy comes in, he'll find they all smell like me.  I've claimed them.  He'll just have to hold on all day.

I just know I've done something completely awesome when Mum says, "Bumpy, you are a complete and total jerk."

I believe this round goes to me.  In fact the whole litter tray war will go to me. Why? Because I cheat. I don't believe in fighting fair. 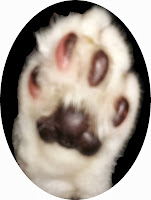