Do you know what annoys Mum more than anything?  It's being suddenly woken up when from a really deep sleep. She jumps up, and then looks around her in an unfocussed way as if she can't work out where she is or what's going on.

Of course, I would never do anything to upset the humans - much.

Excellent ways I've found to wake Mum up in the middle of the night include these:

I was not responsible for the recent late night event that brought the most impressive response from Mum that I have ever seen.

Mum and Fanta are both a tad chubby. In fact Mum's doctor tells her to lose weight, and the vet tells Fanta to lose weight.  Together they are very heavy.  Mum didn't have a lot of  money when she bought the bed, so it was a cheap one, and the other night, it broke.

You should have seen Mum jump up! She was very anxious to make sure her guitar (which was kept under the bed) was safe, and that none of us were under the bed.  Then she fumbled around the house for a while like she had no idea what to do next, before she eventually made up the spare bed in the art studio. Meanwhile, Princess took over the bed that was lying at a strange angle and settled down to a nice sleep on the slope.

Apparently there's a new bed coming, but for now Mum and Fanta are sleeping on the mattress on the floor.  You know what that means?  It's a bigger leap and a bigger landing when I leap on to Mum from a great height. 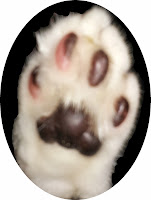