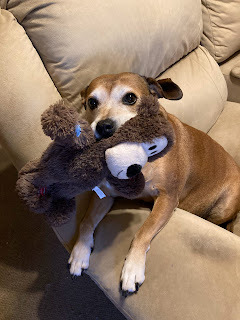 Something happened the other night.  It was a long time after bed time, but still a long time until breakfast.  I heard a croak, and knew a frog had got into the art room. (It's happened before.)

I woke up Mum.  She said, "Just leave it. Hopefully it will go out the same way it got in."  Mum always wants to sleep that whole time between bed time and breakfast.  I think it's very unrealistic of her.

A minute later we both heard the other croaking sound. You know the one, a very unhappy frog.  I insisted Mum had to get up and deal with it.

We went to the art room and Princess was chasing the frog.  Mum couldn't catch Princess, so she ended up yelling for Ms L, who came down from upstairs to help in the frog rescue.

Ms L caught Princess and handed her to Mum, while Mum gave Ms L a broom to shoosh the frog out with. While Princess wiggled and complained, suddenly the frog jumped out of nowhere, leaped higher than the humans' shoulders, making both humans squeal, and then disappeared.

Mum shut Princess in the bedroom, while Ms L looked for the frog but couldn't find it.  I had to find it for her, but then Ms L said I was in the way, and Mum called me to help her block the hallway so the frog wouldn't go that way.

Ms L used the broom to gently encourage the frog to move and try to direct it.  At first the frog really did want to go down the hallway, but once Ms L got it turned so it could see out the back door, it understood and went out in two huge jumps.

A bit later I begged to go out.  Actually I told Mum I needed a wee.  But actually I went out to make sure the frog was OK.  I stayed with it for a while. 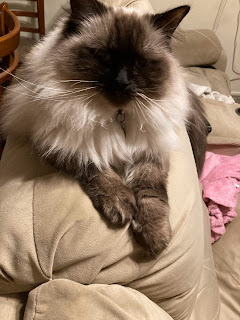 I made a new friend!

My new friend is very little and very jumpy.  We had a great chasing game, but then Fanta and the human put me in the bedroom and made my friend go away.

We weren't being naughty, I promise.  We were just playing.

I do hope my friend comes to visit again soon.

It was the most terrifying experience of my life!

I was trapped in a horrible dungeon. I don't even know how I got in there.  There were monsters: big hairy monsters, and gigantic less hairy monsters. The noises they made were horrible.  I was sure they all wanted to eat me.

When I finally saw some outside, I leapt like I'd never leapt before!

I barely escaped with my life!  Then when I thought I was free one of the monsters came outside and stuck it's giant nose against me and then just watched me for a while.